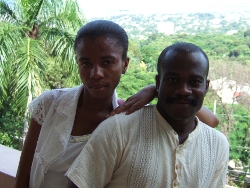 Yves Rameau Beltéus, 33 years old, Haiti. I come from a family of four children and I am the youngest. I am from Les Cayes, the third largest city in the country. My father died four years ago and my mother, who is already 75, works at home.

In my culture, the oldest and the youngest in the family have lots of privileges. After my father’s death, we had to work things out so that life could continue. Haiti is considered the poorest country in the continent but despite poverty, my parents went out of their way to enable us to find our bearings in life. We all studied at university to improve our condition. At school we were always aware of our situation and it helped us to become what we are today.

I want to give you knowledge

Life was not very easy for my parents, in particular in rain and cyclone seasons. To allow us to go to school, my father and my mother had to carry us on their backs to cross the flooded streets. When my father had to spend a whole month working in the countryside to pay our food and our monthly school fees (we didn’t go to a public school), my mum had to do everything for us to get to school. In our culture, when parents want their children to be part of the intellectual class, they have to make every effort so that their children can finish their studies and have a job.

“I have no money, no land to leave behind after my death but I want to give you knowledge; the legacy I’d like to leave you is to be part of the intellectual world, which is the greatest blessing in this world,” my father kept telling us. “I wouldn’t like my family to be divided after my departure into eternity as I have seen in several families”, my father said repeatedly. “This is why I am giving myself heart and soul to the happiness of each and everyone of you.” My dad had no fixed job; every two or three months his workplace would change because he was working for the Public Works, Transport and Communication Department. Most of the time, he would come home for the weekend and would leave again on Monday, or even on Sunday. Or he would spend a whole month away. He also had to spend public holidays wherever he was, in places far away from the city. In that case my mum, who was a dressmaker, was doing everything in the house and was also taking care of my father’s tasks. We were a reference for the people in the neighborhood.

We all lived in the same house without any problems. We were really happy. After my oldest brother’s wedding and my father’s death, I was the only boy in the house with my mother and my two oldest sisters. Today, since I am away, they live alone in my home town. My oldest brother now lives with his wife and three children not very far from my mother’s house.

My place was in the YCW

I got to know the YCW movement when I participated in a summer training and leisure camp that was organized jointly by my choir (the “Chorale Men Contre”) and the YCW in the south-east of Haiti. At the time I didn’t like to speak very much but at the camp, I communicated a lot with my friends and with other young people. After the camp, the YCW invited me through one of its local coordinators, Georges, who happened to be my best childhood friend. I attended a first meeting, and then other meetings. I got to know the YCW method, See-Judge-Act. I couldn’t understand it all but I could see the work the YCW was doing in the world and I understood that my place was in the YCW. Little by little, this is where I built my nest.

Two months later, I became member of the YCW and I attended some training sessions. Then I started inviting other friends to participate in the movement. In Haiti, since the movement is working with young unemployed people and apprentices and most of them are students, we made greeting cards at the end of the year, macramé products and wine to earn some money for the holiday. Every Sunday I attended the meetings. Little by little, the light of the YCW sparkled in me. 5 months later I was a member of the local coordination.

I had experience in organizing people in the neighborhood and at school. My first action was to raise awareness among my classmates and young people in my neighborhood. During the holiday, together with them I organized summer championships and leisure activities to help them overcome the poverty prevailing in the country and allow them to spend their free time without turning to violence. Together with another activist, I formed a group of 10 young people in another area and I got them involved in YCW activities.

My great memory in the YCW

After that, I was elected national treasurer and national fulltimer. We carried out a big national action for cleanliness in one neighborhood of the town of Les Cayes. We organized a demonstration and put forward concrete and realistic demands to the mayor’s office, asking for garbage cans in the streets. We spent over one month discussing with the mayor and the local people in order to find the money for the garbage cans. And we succeeded! It was a really great experience and the local people came to congratulate us on the good job we had done.

Then I became national secretary and later on I was elected at the continental coordination of the YCW Americas. I have been living in Ecuador for over a year now. My parents and Haiti YCW members are very happy for I am the first Haitian to have managed to do that.

A story I will never forget

After my university studies I spent seven years living in a religious community as a “religious educator”. I carried out an action there too. Every year during the summer holiday, we would spend 20 days in our families and the superior would only give us 1,500 gourdes, which equaled the minimum salary of a factory worker. In addition, we were not entitled to studying abroad. I had quite a lot of meetings with young religious people to make them understand that the holiday allowance we received was worth nothing and that training was necessary for us to provide good education to young people in schools around the country. After many difficulties, I obtained two days’ reflection with the people in charge and I put forward concrete demands. In the end the allowance was doubled and the importance of studying abroad for young religious people was recognized. I had dreamt that I could change things, and I did.

Live and die with the principles of the YCW

My dream is to be always closer to the most despised, the most marginalized workers, closer to the poorest and the most deprived people so that their rights be respected. I come from a poor country; I must struggle for a reduction in the inflation rate and in poverty in my country and other countries. Today I am putting into practice what I learnt in the YCW: respect for human rights and personal awareness for a change in the living conditions of all people. The YCW helps me a lot and I want to go on, to live and die with the principles and method of the YCW; it is in my heart today, tomorrow and forever.

28 January
You know the lifestories of people from Haïti that I had the chance to get to know during the continental meeting of the Americas in November 2007. Yesterday I got a mail from Prisca saying that she was alive and her parents too, others died. She writes about the difficulties to get in touch with other people, friends from the joc in Haiti – she is still living with the insecurity about her friends. She confirmed that Pierlyne has been injured badly. Rameau apparently is in Cayes (south-west of the country) and well.

Communication is that difficult inside Haïti it’s no wonder that we don’t know much about people from the joc here in Europe. I talked with several leaders from joci and wsm and it’s the same for everyone. Having been there before the earthquake I’m not that surprised of this difficulty.

During my stay there in 2007 I visited Gonaïves, the city that has been affected by a hurricane in 2004, three years before, and I couldn’t sense too much recovery, people where still liv…
Post a Comment
Read more

13 January
Some reflections about coordinators returning to the base after finishing their mandate.

“Are the actors of the action playing a role and are they havingresponsibilities and tasks that correspond to their level of awareness or not?” For me, over the last years, this has become the most important question to analyse the “Task of Education” process of an action.

Respecting the level of awareness means on the one handchallenging the yws to do their “best” - which guarantees “training through action” and therefore personal transformation. The consequence is an active, dynamic and stable participation in the action – in other words: motivation, engagement and commitment. On the other hand respecting the level of awareness also prevents us from asking too much and discouraging the yws.

10 November
Prisca, 27 years old, Haiti: I was born in Cap-Haitien. I have two older sisters and a younger brother. My father was a house painter and a cobbler. He died in the year 2000. My mother works at home: she makes pastries, sews clothes for people, and sells toilet and beauty products.

Our family life was well organized at home: we had to go to school and also do housework (do the shopping, cleaning…). Then my older sister went to Port of Prince to live with her godmother and since my other sister didn’t like to work very much, I had to do a lot of chores at home, in addition to my studies. When I turned 18, I started my own business. I bought products from the United States and I sold them back. I had always wanted to have an internet café but people kept telling me that I should first finish my studies so that I could do something better. My brother got married. He makes fridges and air conditioning devices, and he has his own t-shirt printing “business”.