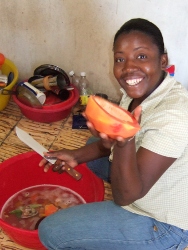 Prisca, 27 years old, Haiti: I was born in Cap-Haitien. I have two older sisters and a younger brother. My father was a house painter and a cobbler. He died in the year 2000. My mother works at home: she makes pastries, sews clothes for people, and sells toilet and beauty products.

Our family life was well organized at home: we had to go to school and also do housework (do the shopping, cleaning…). Then my older sister went to Port of Prince to live with her godmother and since my other sister didn’t like to work very much, I had to do a lot of chores at home, in addition to my studies. When I turned 18, I started my own business. I bought products from the United States and I sold them back. I had always wanted to have an internet café but people kept telling me that I should first finish my studies so that I could do something better. My brother got married. He makes fridges and air conditioning devices, and he has his own t-shirt printing “business”.

The YCW gave me training

When I was 14 or 15, a friend of mine told my father about a training session that was organized by the Cap-Haitien YCW, and she asked me if I wanted to participate.

My father and mother had met at the YCW. When I was a little girl, I used to go to camps, conferences and training sessions with my father. My father was a good leader and he carried out real actions, marches, and rallies. At the time there was a big political crisis and some YCW members who were friends of my father’s were beaten by the police, and some of them even died.

The YCW was divided into sectors: apprentices, students, workers, etc. My brother and I were part of the students sector. We had activities to understand our reality at school. Each sector had meetings during the week and we met altogether almost every Sunday to share about what had been done during the week.

The YCW allowed me to take part in discussions and get information that my parents couldn’t give me. The training (on topics such as medicine and agronomy) and support I got helped me to go forward in my life.

I was elected secretary at an annual assembly for Cap Haitien and I coordinated a small town outside Cap Haitien. I was very active. After that, I became treasurer.

The excluded also have values

When the YCW was faced with difficulties, we invited all activists, active and not so active, as well as the former members to see how we could get by. We set up a new group which was open to all: friends, those excluded from society, poor people (sellers, informal workers). In choirs for instance, only people who can read and write are accepted. The doors of the YCW are wide open to all those who are excluded. We tell them that they also have values.

I was responsible for the new group and it worked very well. It was hard to be both a leader and a secretary. I had to travel all the time.

With the subscriptions, we organized an income-generating activity as a means for self-financing. We made cookies and sweets.

My life in Port of Prince

Then a cousin got me a job in Port of Prince. The YCW had to adapt to the situation and my younger brother became the leader of the movement.

At the beginning of the school year, I distributed school kits (notebooks, pens…) in villages for two months. Now I am working every morning at the office and in the afternoon I go to school because I want to finish my secondary school.

During the holiday I visit my family and I do some work to help them. I miss them a lot.

I love the arts. I would like to earn my living in the arts. Be able to display the things I produce in a gallery. I love my hands, I love seeing them in action. I don’t want to wait. I love working. I hate the people who don’t see what has to be done and who wait for someone to tell them what they can or have to do.

28 January
You know the lifestories of people from Haïti that I had the chance to get to know during the continental meeting of the Americas in November 2007. Yesterday I got a mail from Prisca saying that she was alive and her parents too, others died. She writes about the difficulties to get in touch with other people, friends from the joc in Haiti – she is still living with the insecurity about her friends. She confirmed that Pierlyne has been injured badly. Rameau apparently is in Cayes (south-west of the country) and well. Communication is that difficult inside Haïti it’s no wonder that we don’t know much about people from the joc here in Europe. I talked with several leaders from joci and wsm and it’s the same for everyone. Having been there before the earthquake I’m not that surprised of this difficulty. During my stay there in 2007 I visited Gonaïves, the city that has been affected by a hurricane in 2004, three years before, and I couldn’t sense too much recovery, people where
Post a Comment
Read more

18 November
Yves Rameau Beltéus, 33 years old, Haiti. I come from a family of four children and I am the youngest. I am from Les Cayes, the third largest city in the country. My father died four years ago and my mother, who is already 75, works at home. In my culture, the oldest and the youngest in the family have lots of privileges. After my father’s death, we had to work things out so that life could continue. Haiti is considered the poorest country in the continent but despite poverty, my parents went out of their way to enable us to find our bearings in life. We all studied at university to improve our condition. At school we were always aware of our situation and it helped us to become what we are today. I want to give you knowledge Life was not very easy for my parents, in particular in rain and cyclone seasons. To allow us to go to school, my father and my mother had to carry us on their backs to cross the flooded streets. When my father had to spend a whole month working in the co
Post a Comment
Read more