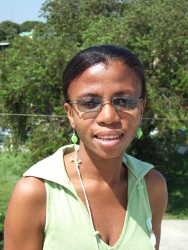 My name is Rose Pierlyne Guillaume, I’m 27 and I come from a family of five children in the Cayes area. My father was a farmer and my mother a retailer. I am the third child in the family. In my early childhood, life seemed wonderful because my father was young, full of energy to work, and he provided us with anything we needed. He had registered us in the biggest school in my home region. I could only blame my father for one thing: he wanted us to believe that we were superior to others, he didn’t allow us to play with other children in our area but he gave us a really strict education and made us respect the principles of life.

Things were not going well

When I was 10-12, my father became ill and had to undergo surgery twice in one year. The doctor asked him to stop working the land and to rest for 2 whole years. Then my mother, who worked in the retail trade, was the only one to feed us and pay the school for 5 children. Things were not going well.

The hardest moment was when the two oldest children finished their primary school and had to go to the city for their secondary education. The expenses went up: rent, food, school fees, etc. Two years later (90-91) I went to the city as well (Les Cayes) to continue my studies.

I met an activist from the Cayes YCW who told me a lot about the movement but I was a bit reluctant and I didn’t want to participate because of the time of the meeting. One day, another YCW activist came to my place to take me to a meeting with him. It was in 1991-1992, something like that. This is when I really got to know the YCW and I became interested in its activities.

I understood the value of young workers

The first activity I took part in was on a First of May in 1992 in Les Cayes. There was a peaceful march with just and noble demands for young workers – I can’t remember exactly what it was but I believe it had something to do with day-offs, annual holiday and ill-treatment of workers at their workplaces. Then there was an intervention in a shop to demand tactfully and respectfully day-offs and annual holiday for the workers. The shop owner ended up granting day-offs and annual holiday to all his workers.

In addition I was most interested in the objective of the YCW and the YCW “See-Judge-Act” method. I began to understand the others and even to care about them. During my integration in the YCW, I came to understand the human value and human dignity, the value of young workers, and how and why I could make demands. With the YCW I learned lots of things that have helped me in my life.

One thing that attracts me and makes me stay in the movement is the understanding of others, and I see that all former members are proud to be former YCWers. And then I was chosen as a delegate for the 2003 continental meeting in Paraguay. This was my first participation at the international level, I felt really happy and I learned a lot to continue working at the national level.

My responsibilities in the movement

I was successively YCW regional secretary (Les Cayes), treasurer and national delegate for the Cayes YCW. Afterwards, I left Les Cayes and moved to Port-of-Prince to continue my university studies.

The movement was really weak in Port-of-Prince. While I was at university, I worked with a grassroots group and organized training for other groups in the city. I am an activist and wherever there are difficulties in the movement, I can and must contribute to strengthening the movement. My experience in the Cayes YCW gave me the motivation to strengthen the Port-of-Prince YCW. I love the movement: the YCW is a school of life; I want to continue learning at this school and put my knowledge at other people’s disposal.

Then I was a national delegate for the Port-of-Prince YCW. The members chose me to represent them in the national team and I accepted: first of all because I wanted to show other people that the girls in the Haiti YCW can take commitments and responsibilities and they can make decisions. I was the only girl in the national team because in the past there were no girls at that level or in the coordination, but now there is a female national treasurer in Haiti as well as another female delegate.

Presently I am a national fulltimer in the Haiti YCW. I accepted to take over from Rameau at the secretariat. The national team chose me and I accepted in order to strengthen the movement. Until today I don’t regret being a YCW member. I accept all those responsibilities because I want to work for the progress of the movement in Haiti and across the world and I don’t want to disappoint the other activists who believe in me.

I took part in several actions that made me feel like continuing my work in the movement.

Labor Day is also a day to celebrate the YCW

In 2005 during the political crisis in Haiti, it was very difficult to gather the YCW members in their usual meeting place in Port-of-Prince. I was aware of the situation and I wanted to celebrate the First of May because it is also a day to celebrate the YCW. I took the initiative to bring together young people from the different sectors. Many people told me it would be difficult, if not impossible. Even the Haiti YCW chaplain told me that if I managed to gather together 100 young people for a debate on the situation, he would give me a prize. And I did! I managed to bring together some 100 young people from the sectors. We held a conference on labor rights; a representative from each sector spoke about the situation they were faced with, the positive and negative aspects, and their hopes for the future.

I also do handicraft with young people; we make items that are useful in their personal lives and for the movement. And I have worked on the task of education of the YCW, the declaration of principles and the ROLWA and talked about the importance of action in the movement, why action should be taken and how to carry out common action in the movement.

28 January
You know the lifestories of people from Haïti that I had the chance to get to know during the continental meeting of the Americas in November 2007. Yesterday I got a mail from Prisca saying that she was alive and her parents too, others died. She writes about the difficulties to get in touch with other people, friends from the joc in Haiti – she is still living with the insecurity about her friends. She confirmed that Pierlyne has been injured badly. Rameau apparently is in Cayes (south-west of the country) and well. Communication is that difficult inside Haïti it’s no wonder that we don’t know much about people from the joc here in Europe. I talked with several leaders from joci and wsm and it’s the same for everyone. Having been there before the earthquake I’m not that surprised of this difficulty. During my stay there in 2007 I visited Gonaïves, the city that has been affected by a hurricane in 2004, three years before, and I couldn’t sense too much recovery, people where
Post a Comment
Read more

18 November
Yves Rameau Beltéus, 33 years old, Haiti. I come from a family of four children and I am the youngest. I am from Les Cayes, the third largest city in the country. My father died four years ago and my mother, who is already 75, works at home. In my culture, the oldest and the youngest in the family have lots of privileges. After my father’s death, we had to work things out so that life could continue. Haiti is considered the poorest country in the continent but despite poverty, my parents went out of their way to enable us to find our bearings in life. We all studied at university to improve our condition. At school we were always aware of our situation and it helped us to become what we are today. I want to give you knowledge Life was not very easy for my parents, in particular in rain and cyclone seasons. To allow us to go to school, my father and my mother had to carry us on their backs to cross the flooded streets. When my father had to spend a whole month working in the co
Post a Comment
Read more